Upstairs cozy nook and behind the scenes

I'm going to show you a secret!  When you go to someone's home, and you see a partial wall sticking out, such as this one (below), it's usually  because there is something inside it such as plumbing or heat duct.  Sometimes you will notice a "box out" along the top of a ceiling.  That's usually heat duct.  This is in the closet that we enlarged upstairs.  We had to run some plumbing from the bathroom below it, which is right below it.  So we had to make a box out.   I'll show you more after it is dry walled. 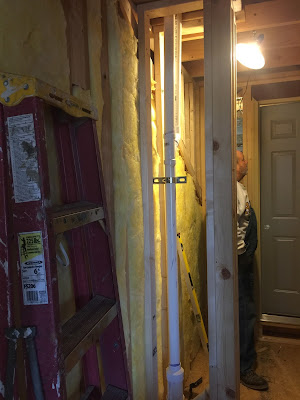 The other side of the box out. 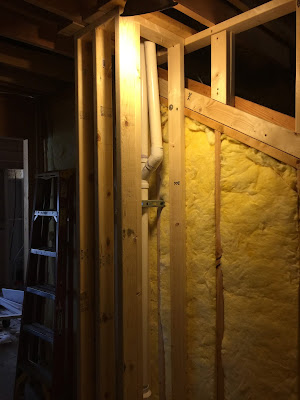 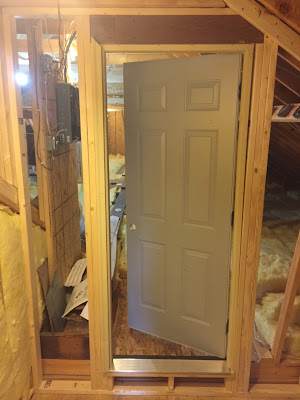 Had we decided to enlarge this closet, and it was in the original plans, we wouldn't have had to add to it later.  As it were, we had to add a partial wall,  (we- as in Dave!) which was a bit tricky.  We also had to remove the original 2x4's the carpenters installed and add support beams below the floor.  I tried to find that post from a couple of years ago, but couldn't find it.  We had to do it before we enclosed the ceiling on the main level. 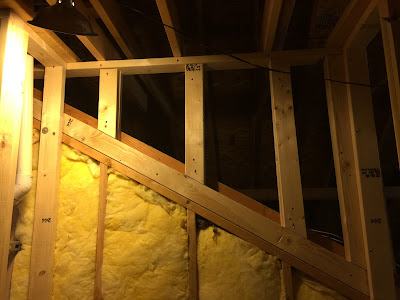 Anyway, Dave loves a challenge and he finished the wall. 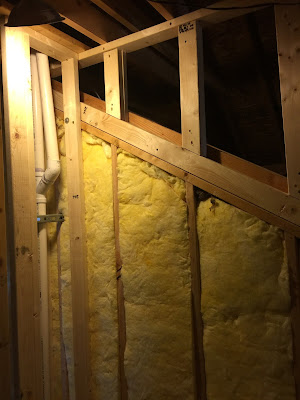 I thought I would show you some of the behind the walls stuff that goes on in a home.
Lots of wiring. 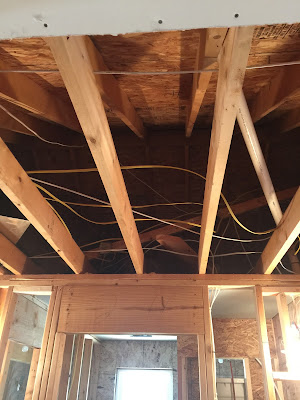 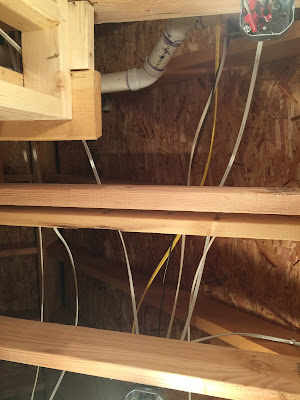 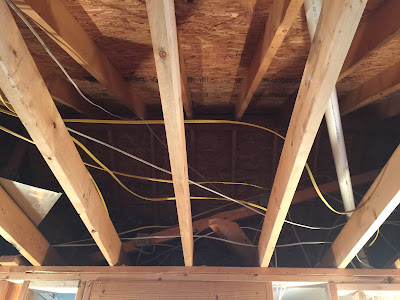 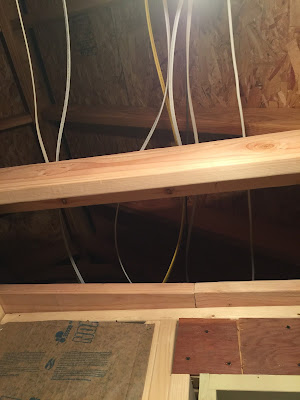 This is a space that he made for a cold air return, which will be in the upstairs foyer ceiling. 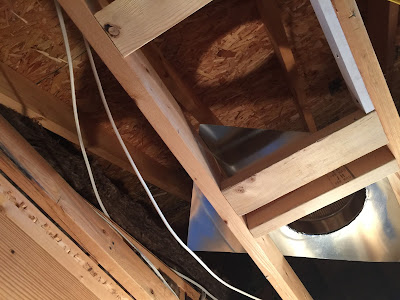 And here is the closet now. 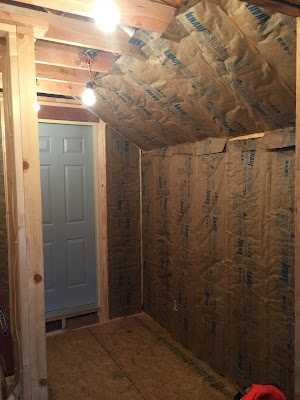 It looks very much like a cozy nook, and I love it!  Dave reinforced the support beams across the top.  He calls that "putting the love into the house." 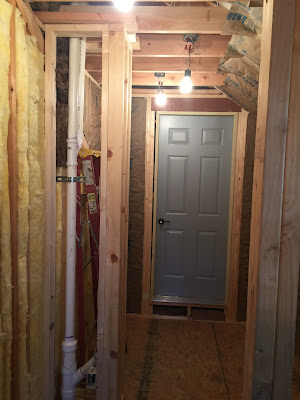 This is from standing inside the closet looking across the foyer.  The bathroom is across from the closet. 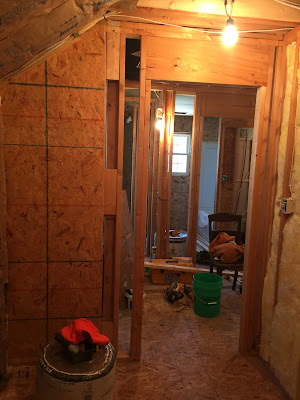 That's it for now.  There is always so much behind the scenes stuff that goes on to building a home.  I know it's a bit boring, but if we didn't need wiring, plumbing, or heat, or support beams it would go a lot faster!

Have a great weekend!

Starting on the Upstairs!

And he's started on the upstairs.
Come on up!  The lights are on. 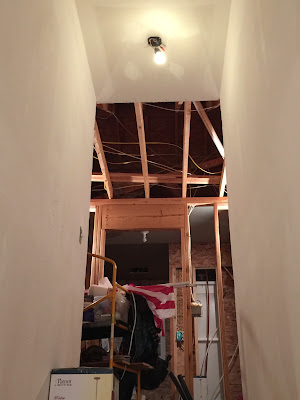 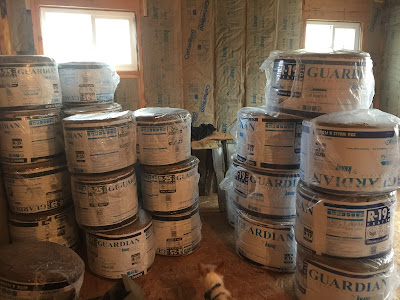 So this is the front bedroom.  There are two bedrooms and a bathroom in the middle of them. 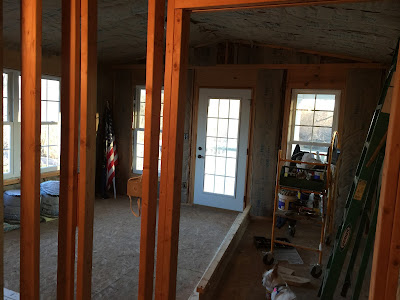 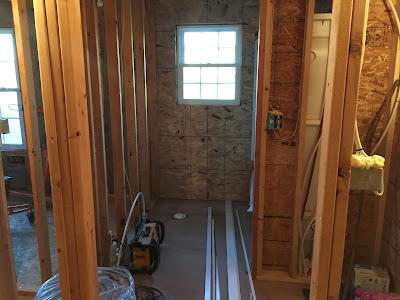 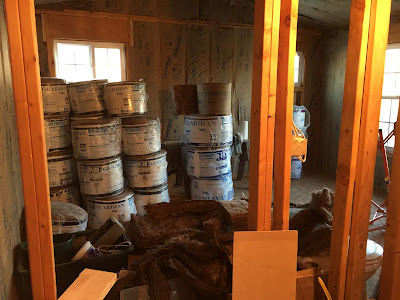 As you can see, lot's of insulating going on.  But before we insulated, he wired all of the rooms for lights and ceiling fans, and he plumbed the bathroom.

The ceilings are going to have a slight vault in the bedrooms. 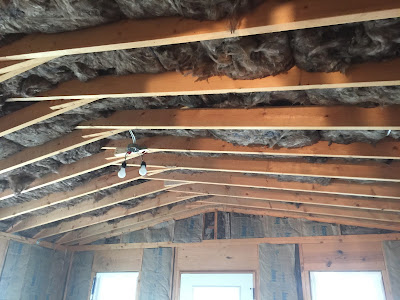 This front bedroom has a balcony and lots of windows.  I think we'll probably sneak up here to sleep now and then for fun!

Just a picture of the back bedroom full of insulation! 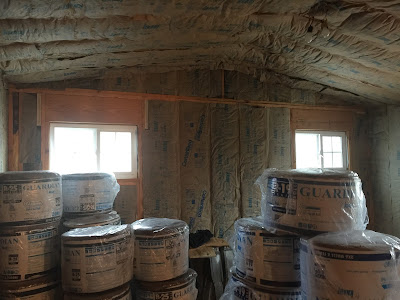 This room is a closet.  Behind that door is attic.  Most of our upstairs is attic. 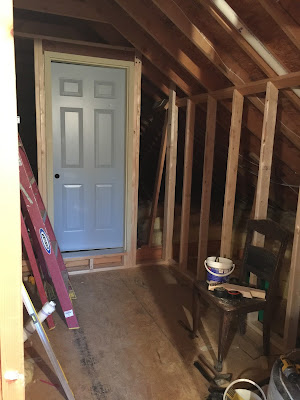 That's all for now....It's exciting to see the walls going up in the closet.  It was actually a very small little linen closet and we decided to blow it out into an upstairs storage closet.  Why not?  There's a LOT of attic space.  Hope to be posting more soon!