The mud room and office area

I realize it's been awhile.  I didn't realize it's been this long!  I get so behind because when the work on the house is plumbing, wiring, insulating, heat ducts, etc...behind the scenes stuff, it all starts to look the same.  Even to me.

Remember the last post, about my kitchen, when I said I had to men sitting at my table giving me ideas about my new kitchen.  I was proud to have them at my table. I asked their mom, my cousin Gloria, to send me a picture of them all dressed up. Here ya go!  I'm so proud of them.  And, about the kitchen...well Gloria came over again and I showed her another idea.  Oh Lordy people, I'm changing some plans already!  I knew I would, which is why I started planning the kitchen early on.  I'll show you that later.... 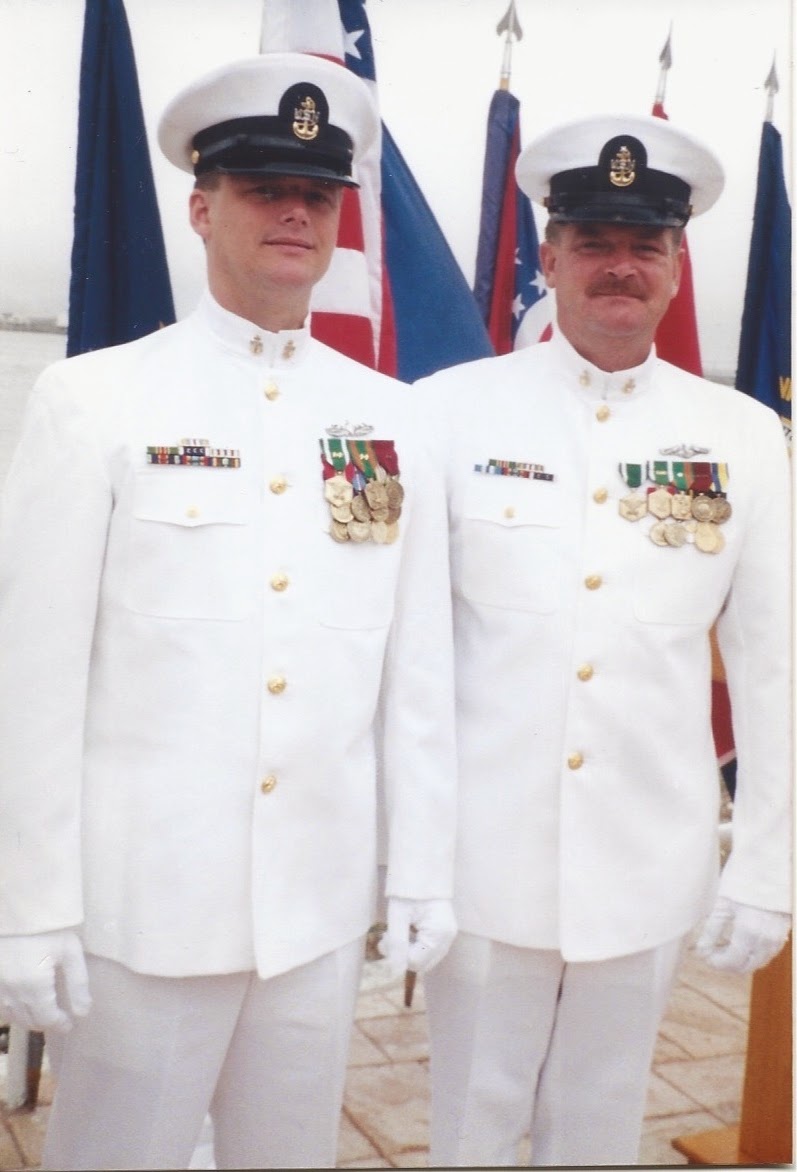 Right now I'm going to show you what we've been up to the last month.  Take a walk with me down the foyer. 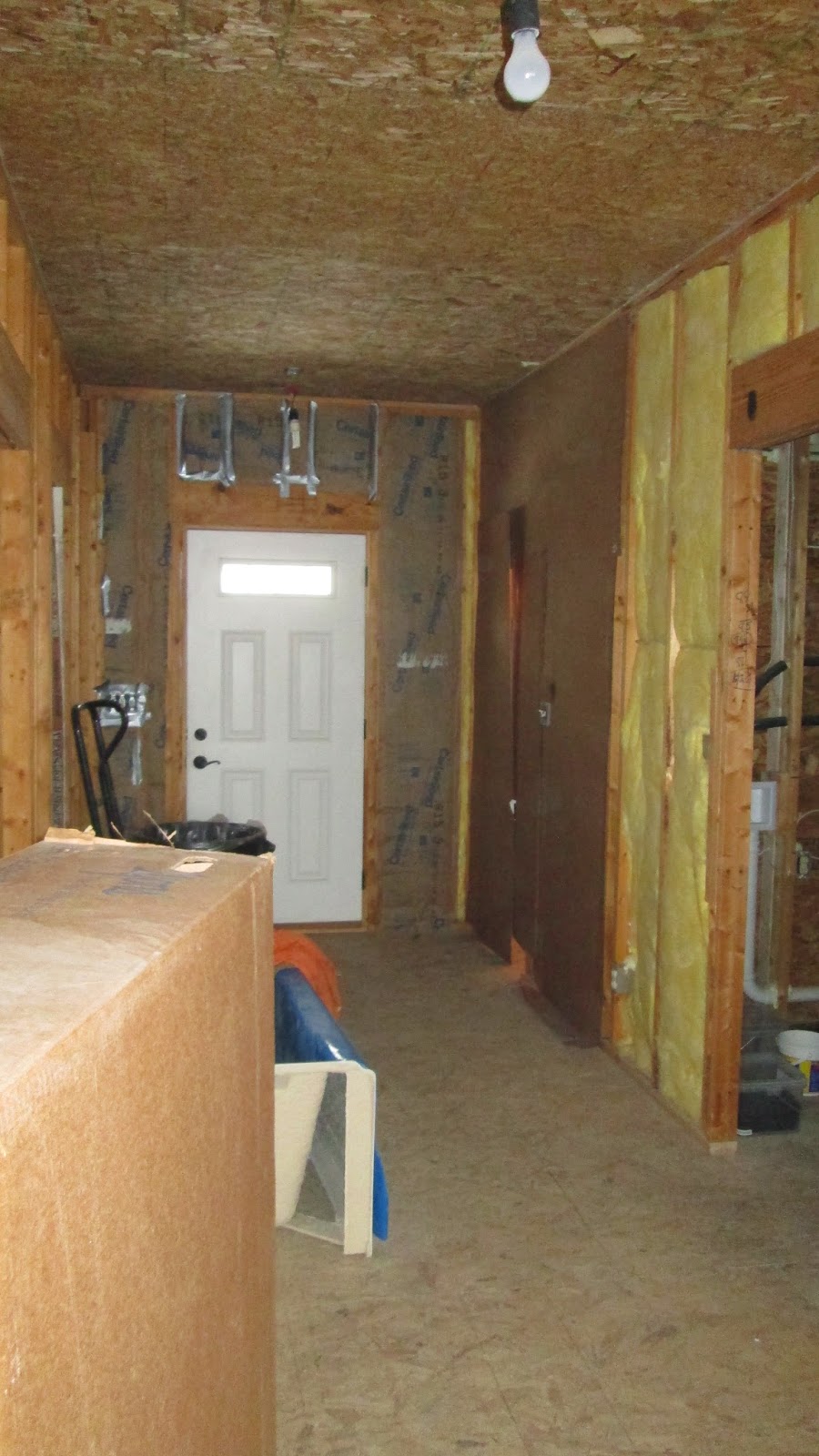 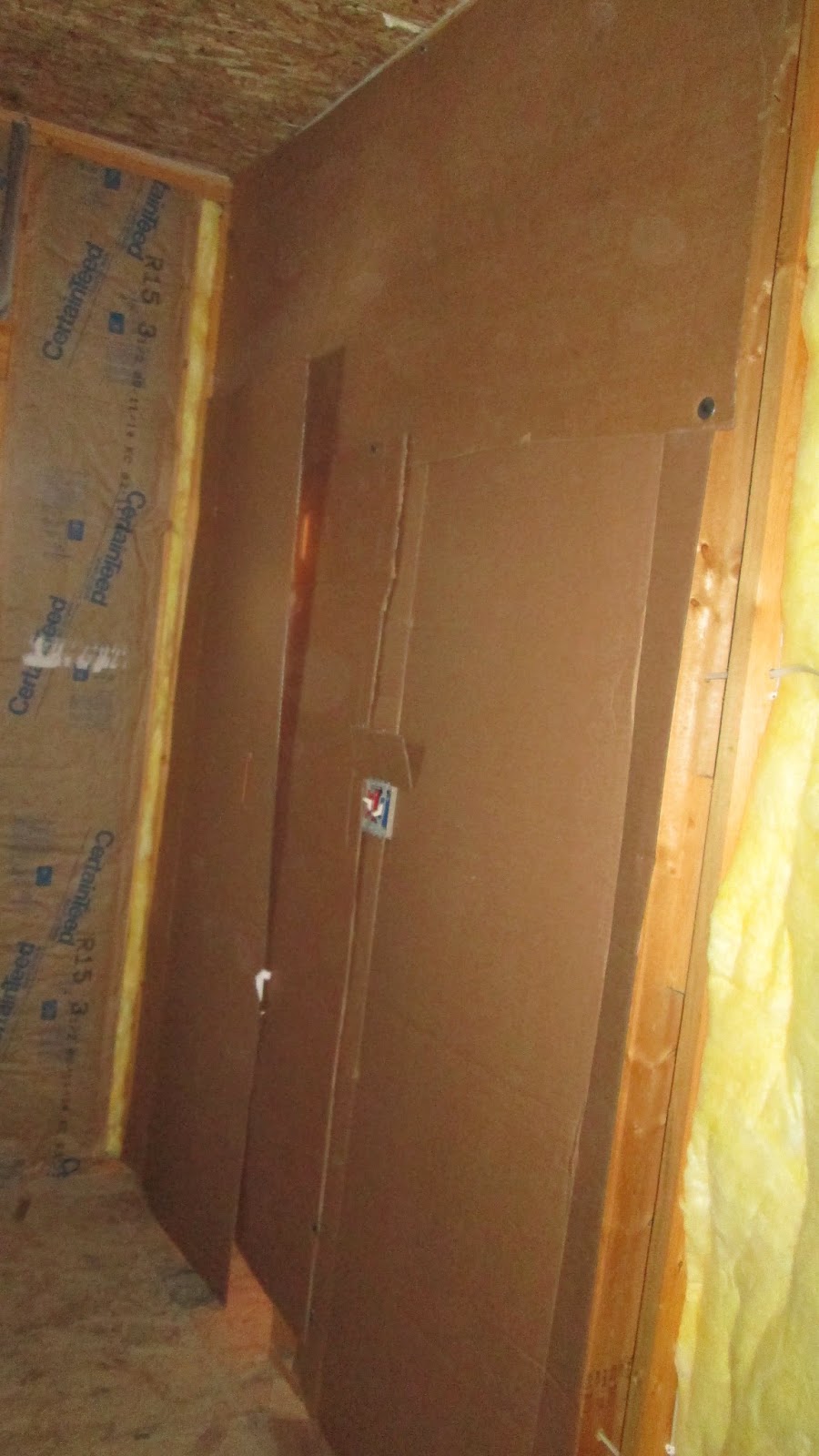 Dave had to put up a cardboard wall so he could run a space heater.  We have the insulation finished, but it's been in the 20's here (Fahrenheit), and with no heat and no walls up dividing the rooms, he had to make some cardboard walls.  As you can see the electrical is finished in the mud/office room. 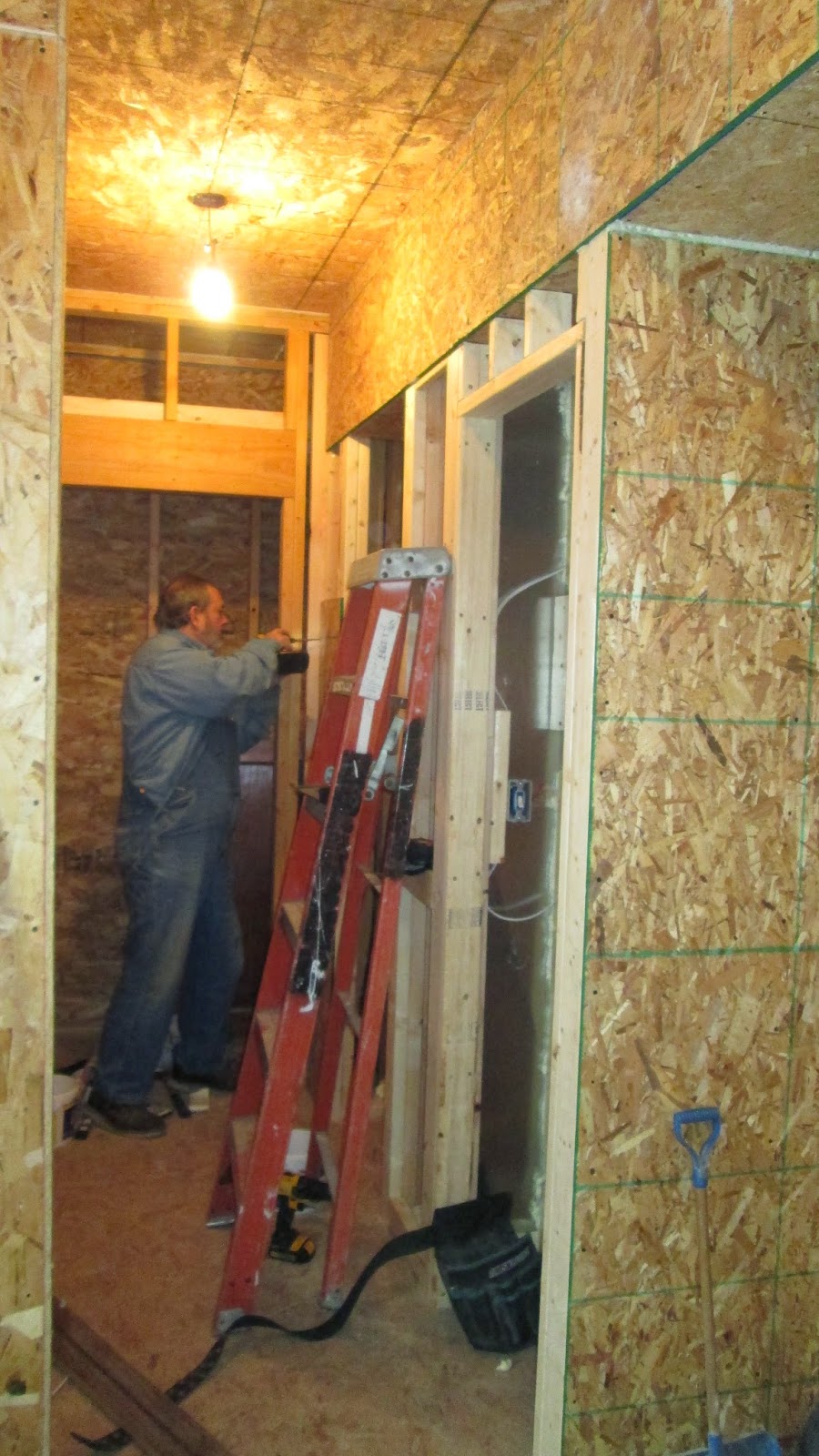 We've had to change our plans in this room quite a bit.  As a matter of fact, most of it was figure it out as you go!  The big space you see here is where a desk will go. 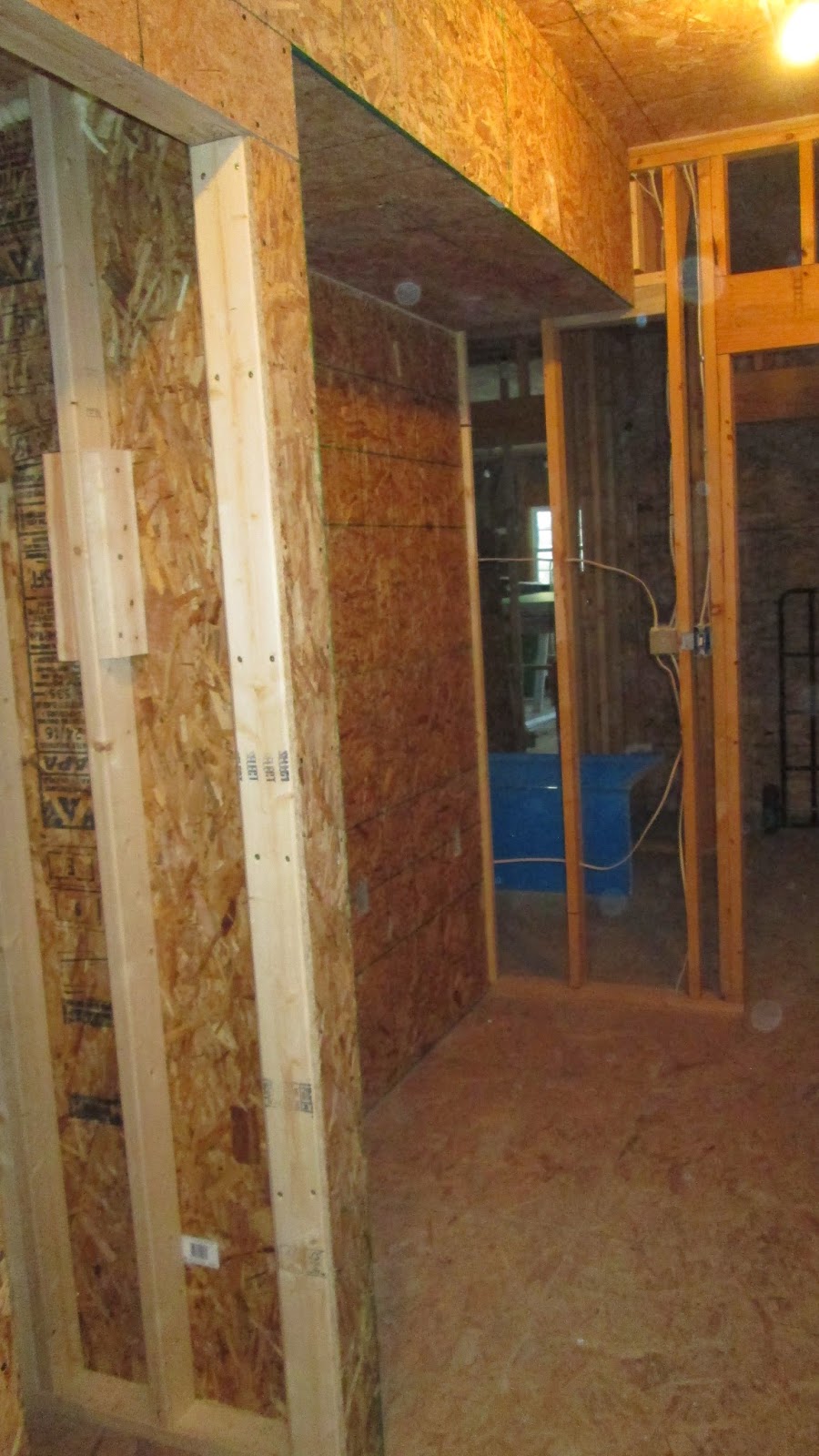 We put in a couple of outlets...and had to think if we were going to need future outlets for other office stuff.  Things change so quickly with computers and such, and since it's an office area, we'll probably have a router, computer, printer, phone charger, ipad charger, and lamp.  I actually figured up what all we had plugged in now....and it's all that plus a desktop that gets used now and then. 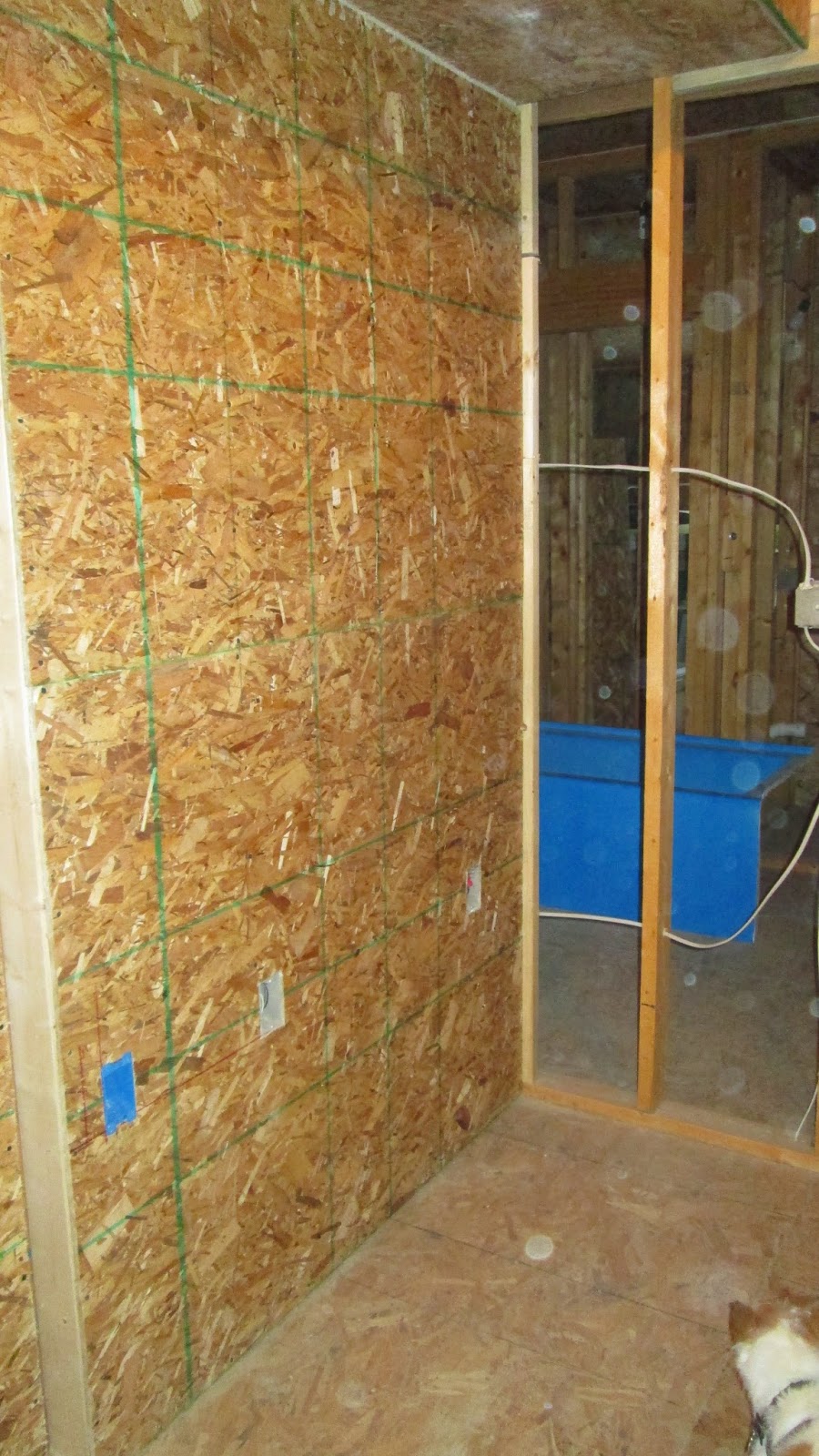 The reason we had to plan as we go, is because the chase area was way too small to fit everything in it.  This duct work is actually coming up through a closet. 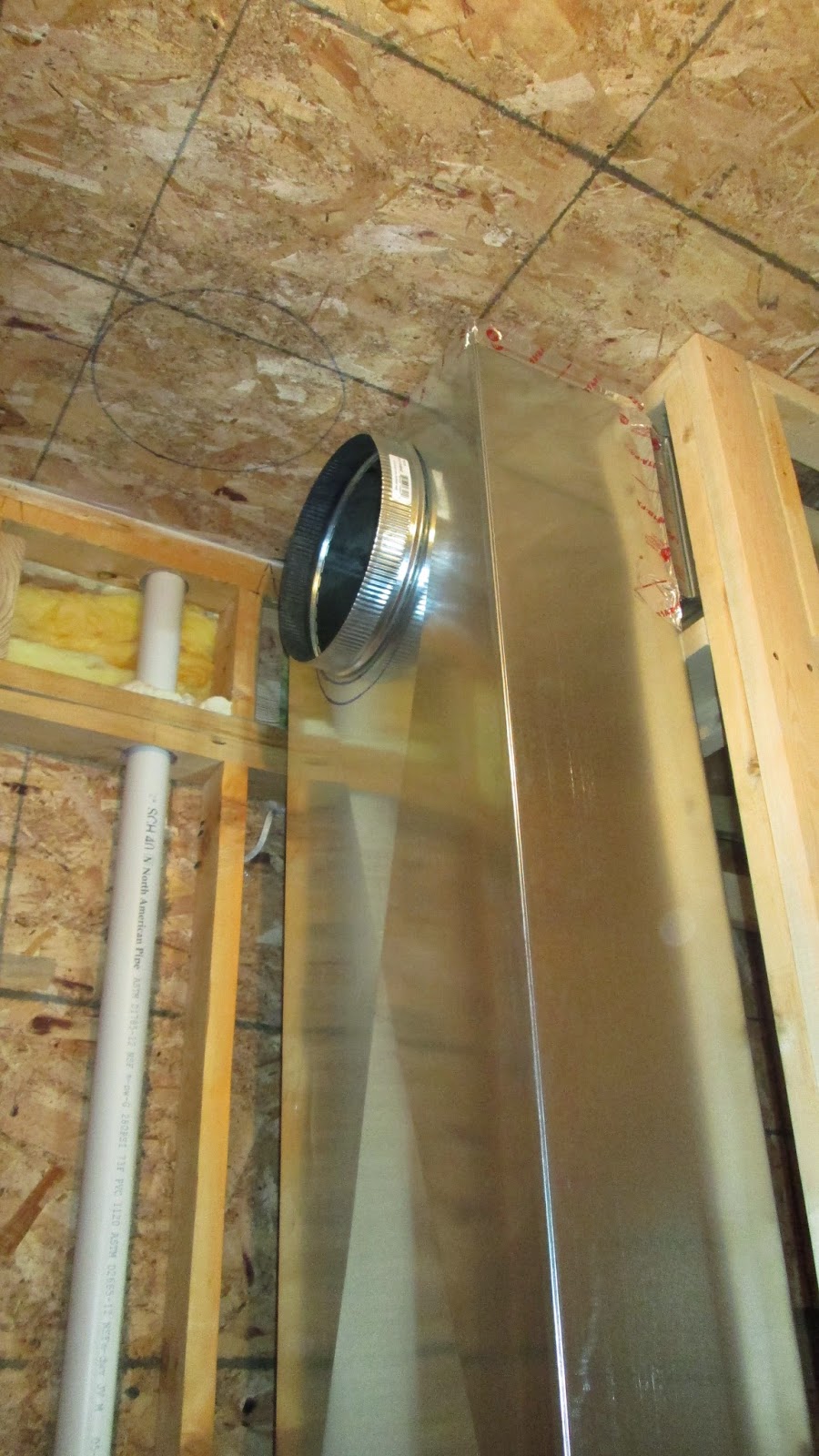 So we turned what was going to be one long closet, into two shorter ones. 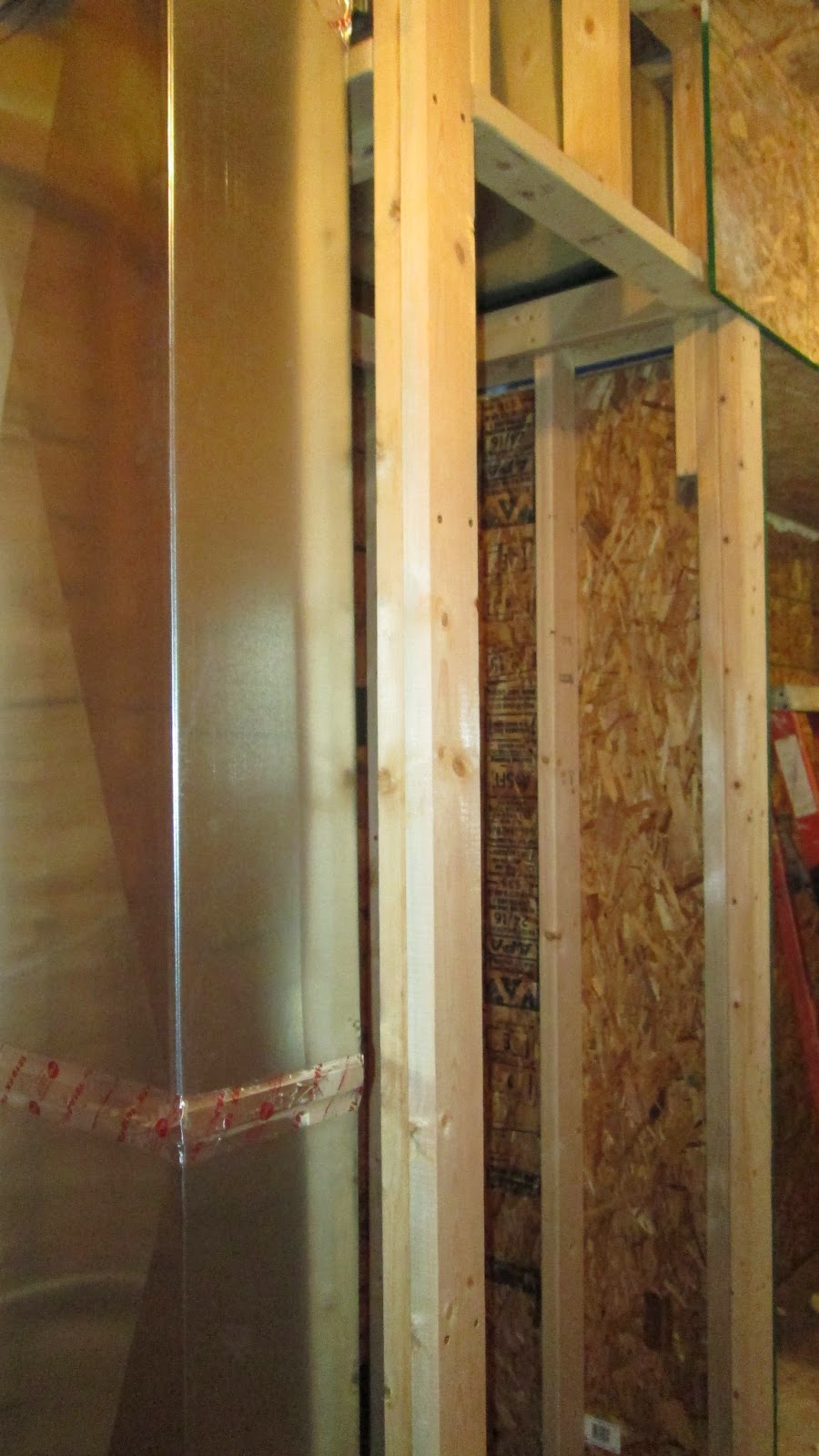 And Dave lowered the ceiling to add a bulkhead which is holding more duct work.  (cold air return) 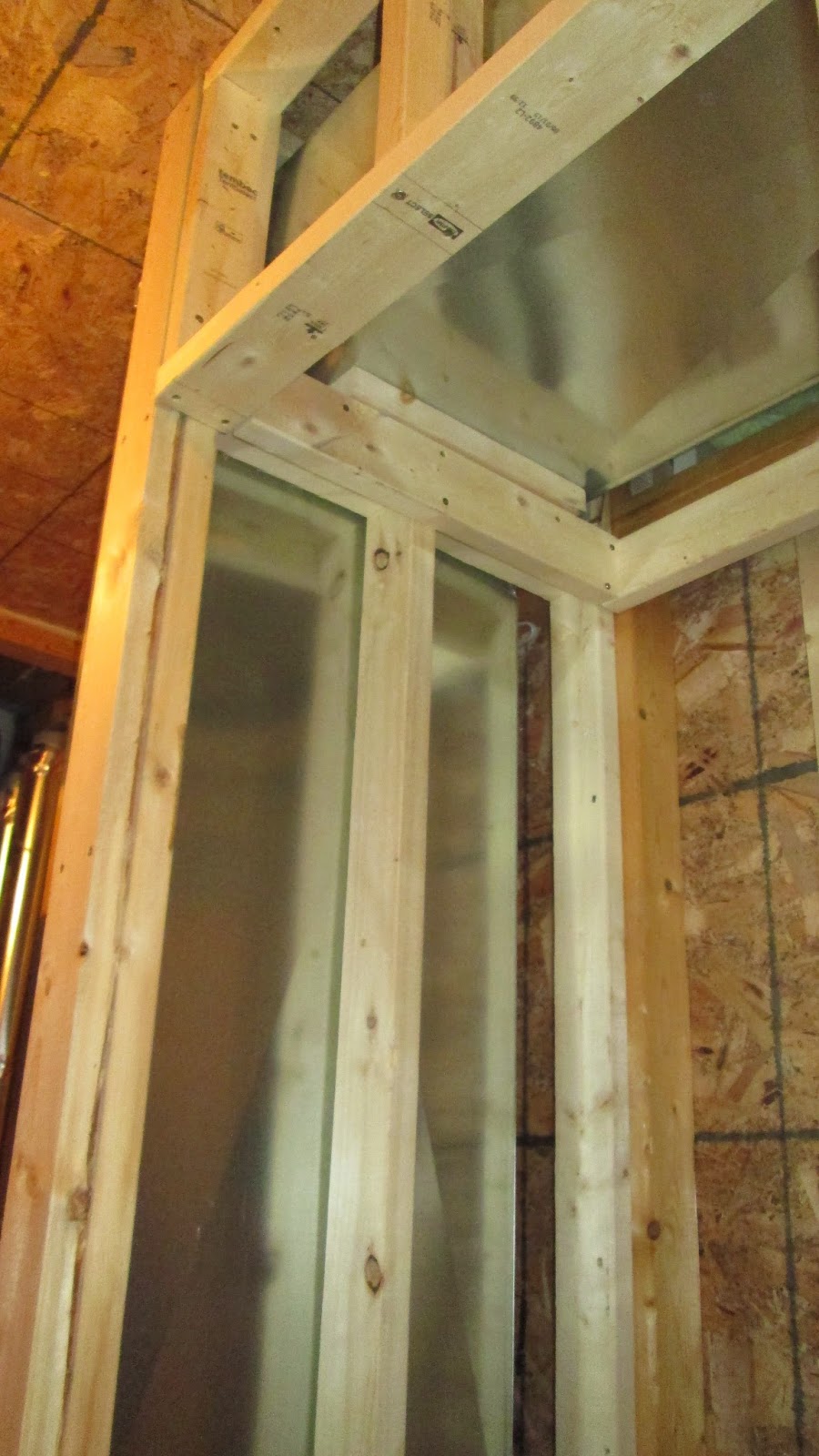 See it in the picture below.  It's the area above the space.  No one will ever know what's inside all of this when the walls are finished, but my goodness there is a lot of 'stuff' that goes on behind those walls! 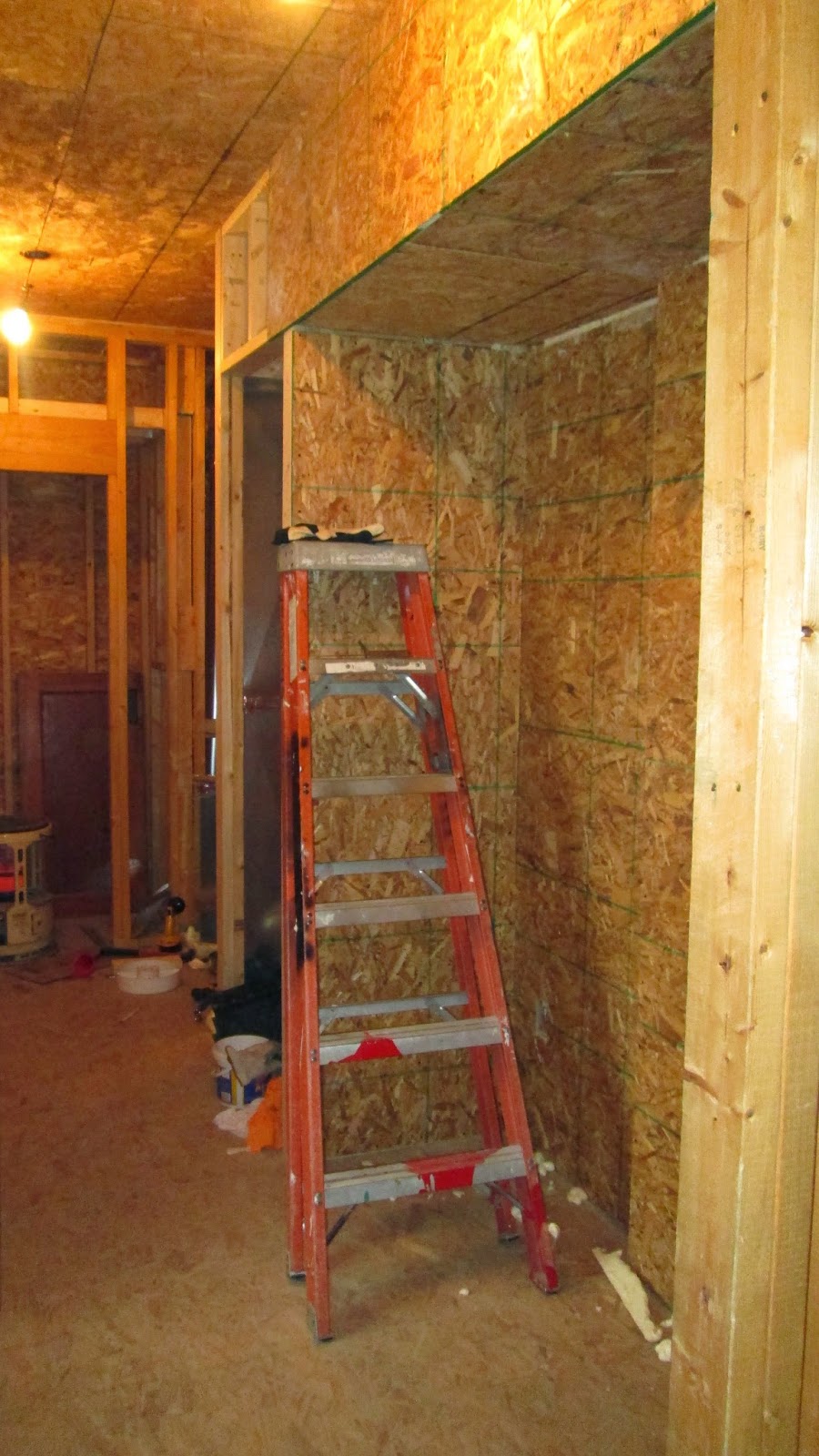 Cold air return leads out into the foyer.  Not my choice, but it is what it is.... Here is a picture of the finished room.  We have three coat closets in this room.  One on the end, then two on the right hand side of the picture.  On this end is the desk area. 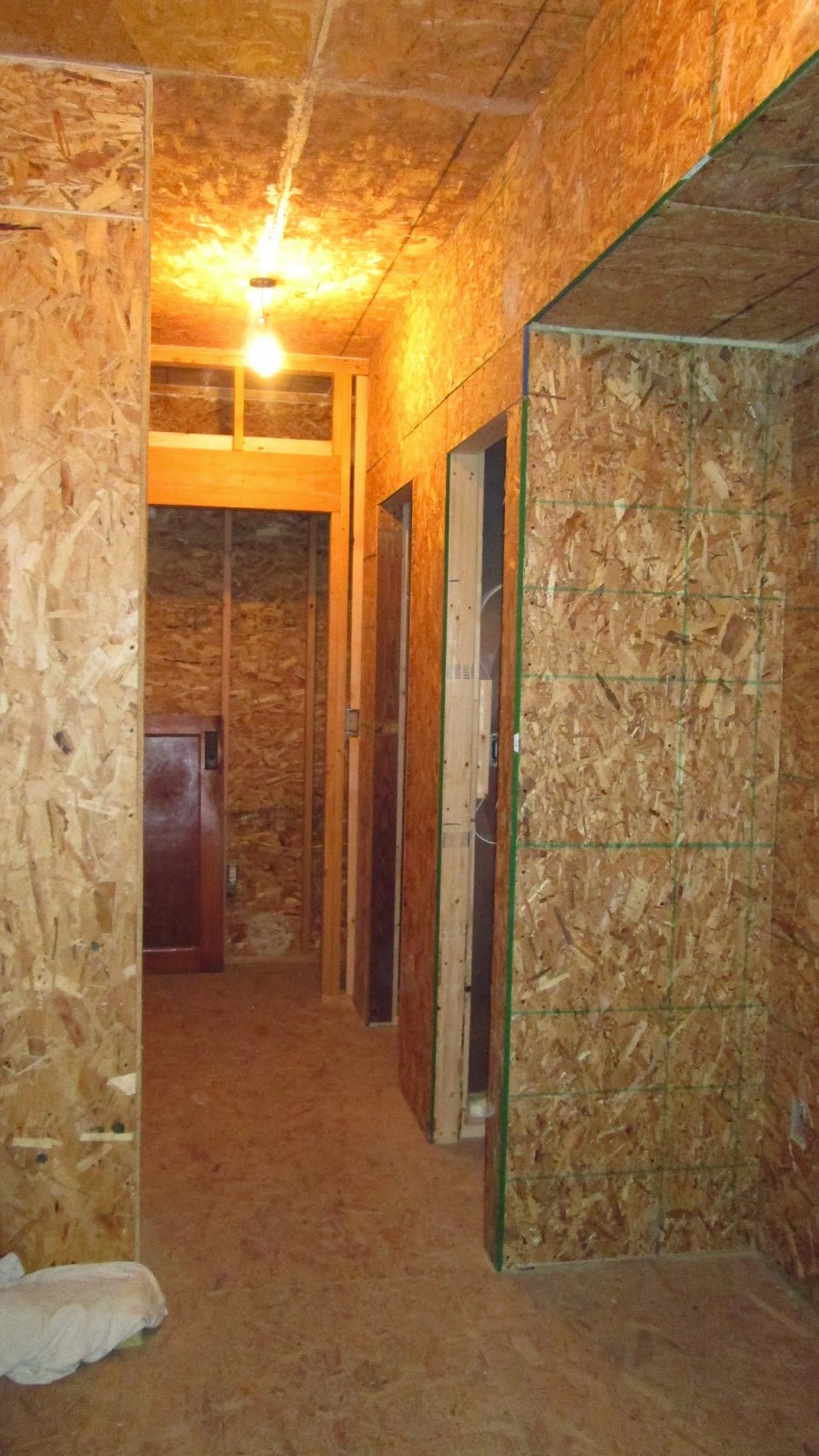 Closer pic of the closets. 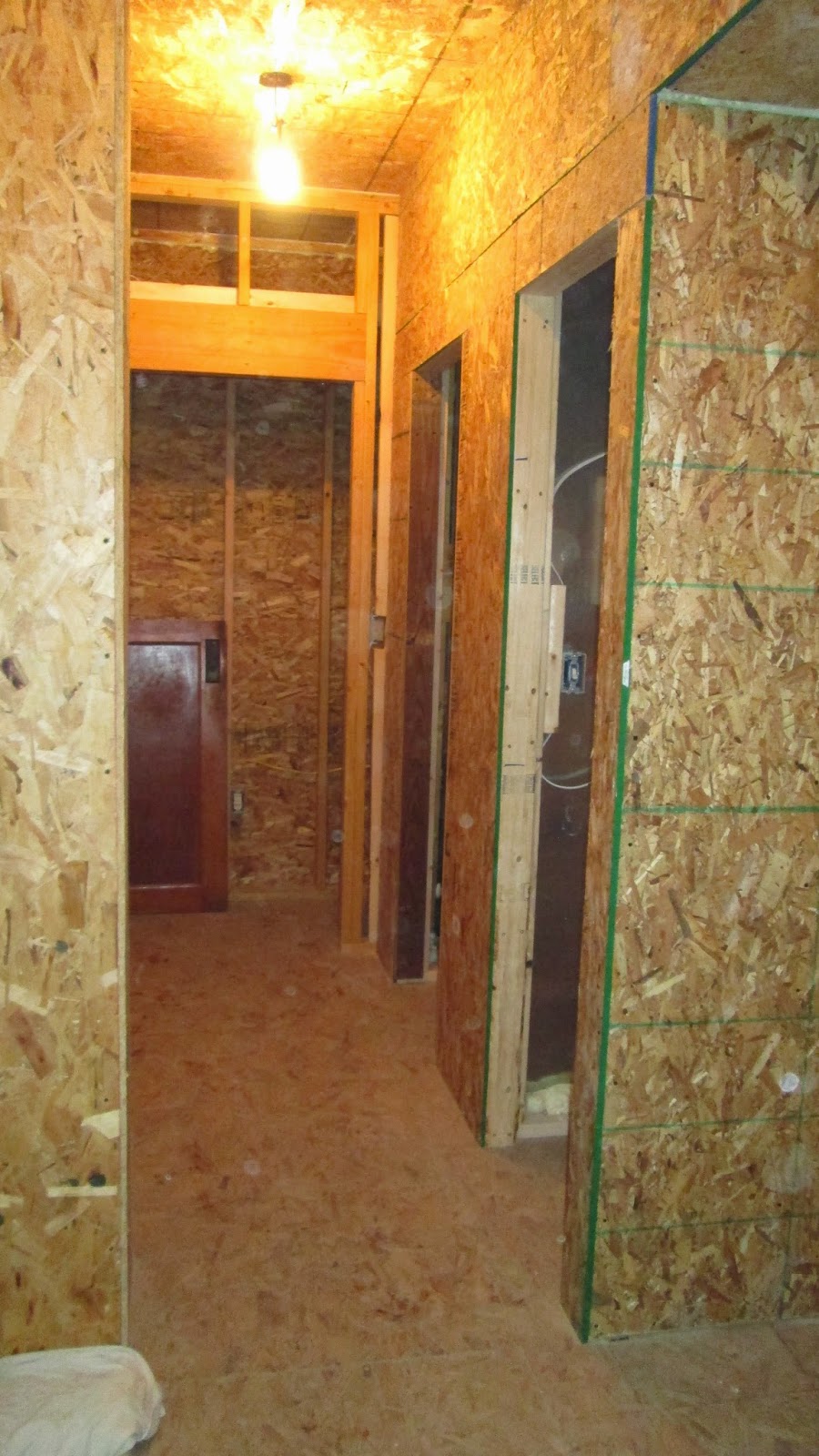 So this is one room that has gotten finished in the last month.........

There are a couple of things I'd like to say.  First of all to Kirsty from Rural Retreat Restoration blog.  I'm sorry to take so long to answer your questions.  I thought I would answer them here, because they are all a part of building a house here in Indiana.

Secondly, there is one thing that we had to do from the beginning and that is to determine if the land we bought was a "subdivided property" or a "legal lot of record."   If the original land has been divided off, then it is called a "subdivided property".  If it was subdivided, then houses are not supposed to be built on it without getting government permission.  Meetings need to be attended and neighbors need to be notified.  A Legal lot of record land is less of a hassle.  Even though our land was subdivided, the original house was on our property, which deemed it a Legal lot of record, so we were fortunate.

And thirdly, we did have to get permits.  A permit to build, a permit for a septic system, and had the driveway not already been here, we would have had to get a driveway permit.  All of them cost money. On a side note, the septic system is governmental ruled.  We had to get a list of soil inspectors and septic installers from "the board of health."  From that list we had to have our soil inspected, and the slope of the ground tested, to see what type of septic system could be installed.  They cost anywhere from around $6000 to $30,000.00 depending on how the soil inspection goes.  We had this done before we bought the property because there have been stories of people buying acres of land and not being able to afford a septic system or not be approved for one.  We had a neighbor out here who lost their house to a fire, and could not re-build on their land because the septic system could not be approved.  The rules have changed to many homes since the original septic systems were installed.  It's got to do with pollution to our land and water with original septic systems.

I hope that answers your questions, and I hope you can get your cottage restored!  A year is a long time to wait.