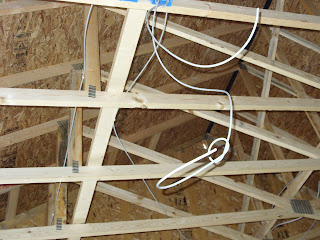 See this....it's wiring? It's wiring for garage doors, garage lights, etc. You have to wire before you put the insulation in and the ceiling up. 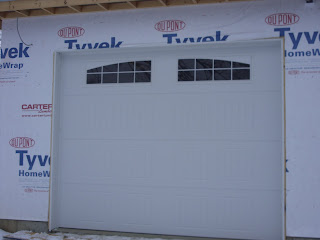 This is a garage door, minus the hardware. They are not 'movable' though. They are just in. Dave has to finish putting the ceiling up, and the support tracks up, so the doors will open. 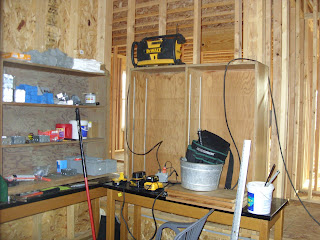 And before he did one more thing, he had to get some things organized so he could find stuff. It was getting pretty messy out there. This is our breezeway. He's turned it into his office area. 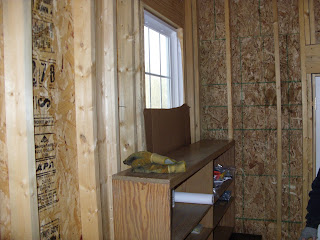 I thought I'd show you the "man curtains!" See them on the window? 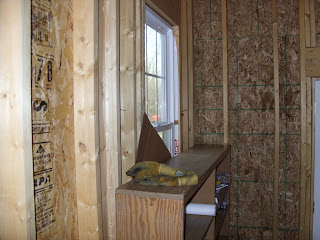 A piece of cardboard held up by two nails! 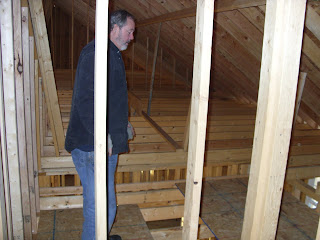 and here, Dave is showing me yet one more brilliant idea. We have a linen closet upstairs. It's just a small closet with room for a few shelves for towels. Well, why not blow out the wall and use up some of this attic space. 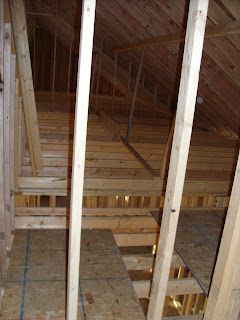 WHY NOT? GREAT IDEA!
We'll have a linen ROOM! 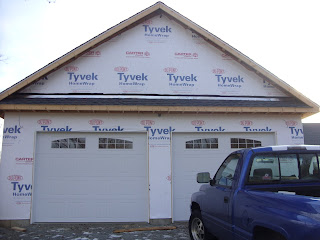 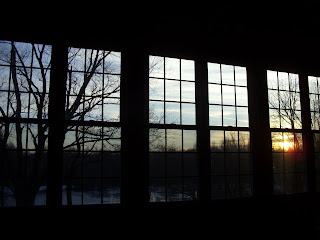 While we were taking a break in our unfinished family room, I had to snap a picture of this sunset.
Here are a few more garage pics. The south wall he was working on this week is now done.
wiring...insulation...osb - done! 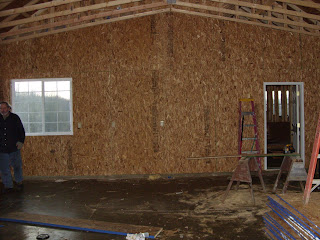 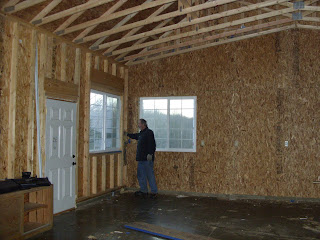 He's going to put work benches under those big windows.. 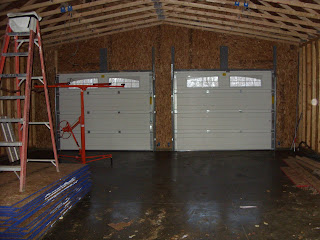 Garage doors are up, but as I said, they are not finished or working yet. Just keeping the wind and animals out. 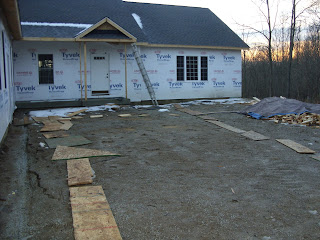 Our courtyard? It warmed up in the last couple of days and we have a muddy mess! But you can get a lot more work done when it's warm out and I love it.

Email ThisBlogThis!Share to TwitterShare to FacebookShare to Pinterest
Labels: garage

It's been so cold this week that Dave bought a metal trash can and loaded it up with scrap wood from the framers. He's using it to warm his hands while he is working in the garage. 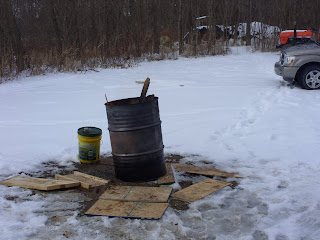 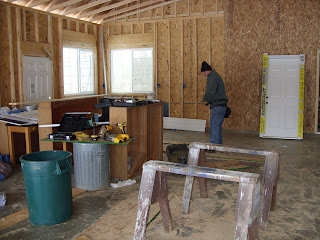 He decided to put up some osb on the South end of the garage,
to use what was left over and get it out of the way. 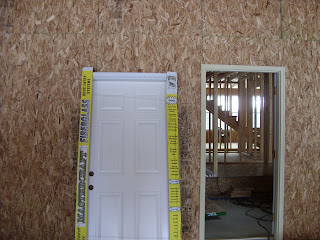 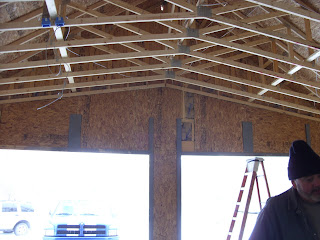 Email ThisBlogThis!Share to TwitterShare to FacebookShare to Pinterest
Labels: garage 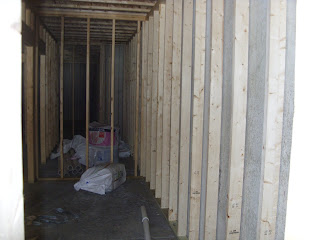 We had our framer put studs up all around the basement so we can insulate it and put walls up. He is so quick and does such a good job it made more sense for him to do it than us. You are looking at a mechanical room, and beside it is a pantry. 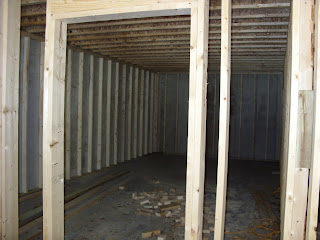 He got it done. This is going to be a storage room for all of our stuff while we live in the basement. 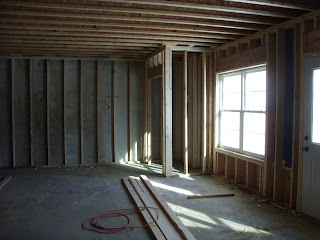 And this is one end of where we're going to live. Our framer also built us a couple of closets. The end you are looking at above will be a kitchenette area. When we move upstairs we are going to keep this area a kitchen. Then I can use it like a summer kitchen for canning. Maybe for extracting honey and processing meat too. 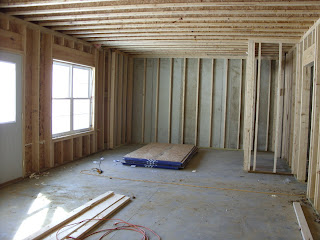 This end will be a bedroom, with the living room in the middle. We will be living in an efficiency. Oh well, less to clean right? When we move upstairs, we plan on this end being my craft room.
On Wednesday, the "window guy" came to our house, as we had some issues with our new windows. The sashes in the front were sagging - he replaced them. Two of the windows had weatherstripping coming off of them - he fixed it. And he also showed Dave how to fix the windows so they will open easier, which was a huge concern of mine. I have windows open whenever possible and these were so tight, I could barely open them with nothing in the way. I told Dave I will never be able to open the kitchen windows with a sink and counter in the way. So now he knows how to fix them so they'll open easier. I'm so glad.
Progress on the house is slowing down, as you've noticed. It would be fruitless to heat it right now since there are no walls up and some places are open. Besides, we don't have a furnace yet, or duct work, or registers! By the time Dave gets off of work, he only has a couple of hours before it gets dark. He's working out there, installing doors and locks and such. The house is now locked up. So, we are doing some stuff out there, or he is, but it's just slow....and cold.
Cindy