I hate meeces to pieces!

Am I ever behind.  So much so, that I'm going to try to post every this week to get caught up.  We'll see how that works out for me!
So...back to April.....
Well first of all...Dave announced to everyone last year, that we were having Easter dinner this year at our house.  So by golly we're having Easter dinner at our house!
We decided to have it in our big room upstairs. We dug out tables from the pole barn and a couple hidden under 'stuff' in the house.  Some even had to be put together! 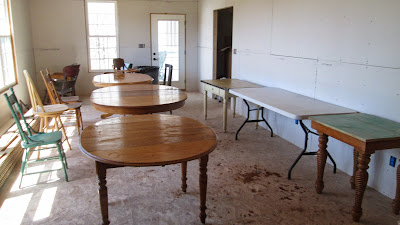 And Dave worked really hard installing a temporary toilet and some doors in the bathroom on the main level. 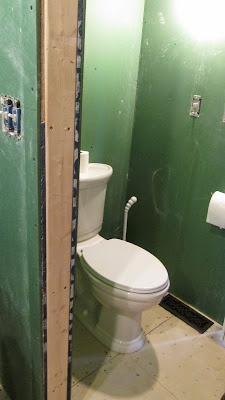 I can't remember if I told you this story or not, but the door that leads from the master bathroom, into the bathroom, was small.  We agonized over re-doing the doorway to make it bigger.  We said all along that we were going to make everything in this house wheelchair/handicap accessible, or have the possibility of making it that way, in case we ever needed it.  We never want to move again!  So, after thinking about it for a couple of days, Dave took the header off, put up a new one, and widened the doorway.  But because of the studs, and the placement of the shower, we could only get a couple of inches.  Oh well, better than nothing.  It changed the doorway from a 30" to a 32", which also looks a lot better. 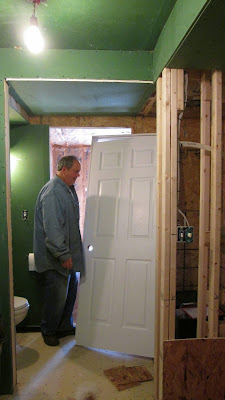 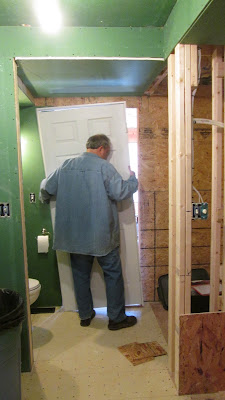 So, the last thing we needed for Easter dinner was heat.  As you know, we've been living in one room in this house in the basement for over two years now.  We have electric baseboard heat in that room.  But we will have natural gas heat for the house, when it is finished.  And in the long run, we'll probably heat with wood to save even more money, since we have about 25 acres of trees, that always seem to be falling over! We have also been using an electric water heater.  Gas is much cheaper than electric in our part of the world.   And if we needed to heat the upstairs for Easter, we needed to get the gas turned on.  So we made an appointment with the gas company to come out here.

The gas company got here and checked our water heater and furnace for leaks.  Nothing leaked!
But the water heater would not run at all.   We could not figure it why it would not work.  Dave read and re-read the instruction manual, and called the company that makes the equipment.  And...ummmm....he knew more than the people at the other end of the phone when he called!  Not bragging, just fact.  Come to find out, the water heater had a wrong part on it from the factory!

And the furnace...even the gas company was perplexed. The only thing they could figure out with the furnace was that maybe the company, or Dave, dropped a nut or bolt into the heater motor while working on it because when they turned it on there was a small noise that sounded kind of like a quarter tumbling in the dryer, when you don't empty the pockets first!  The furnace would turn on, but it would not stay on.  So the gas company could not turn on the gas.

After much talking I said, "Show me what you are talking about instead of telling me.  You never know, sometimes you show me stuff and it's the simplest thing that has been overlooked."
So we went in the "maintenance room" and he proceeded to explain stuff to me.
Like, did you know that you can only have so many "points" when you are venting a gas water heater or gas furnace.  And points are calculated by the length of the PVC pipe, and the bends in the PVC pipe.  So this bend coming out of the furnace is worth "X" amount of points. 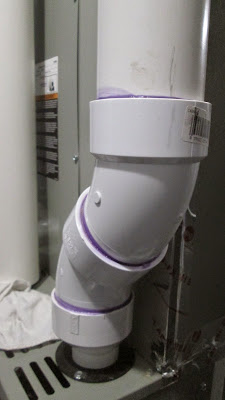 And you can only have "X" amount of feet of pipe.  I'm using "X" because I can't remember the exact amounts. 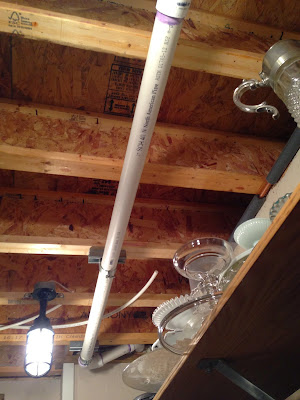 Then we went outside to this little alcove between the house and the garage. 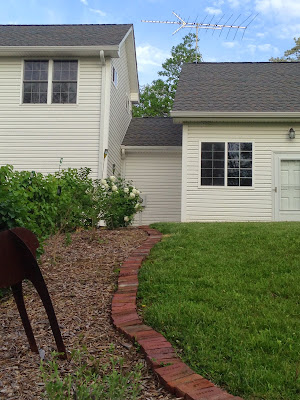 This alcove is where all of our "maintenance" type stuff was supposed to come out of the house.
As we were standing there talking I looked down at my feet, and there was a "nest" of some sort by my foot!  It was a perfect cylinder shape, like it came out of one of those pipes to the left (that are now capped off)
Dave said, "Oh my gosh, I bet we blew that birds nest out of the PVC pipe when we turned on the heater!"
I said, "That is not a birds nest, that is a mouse nest, and I bet you don't have a nut or a bolt in the heater motor, I bet you have a dead mouse!" 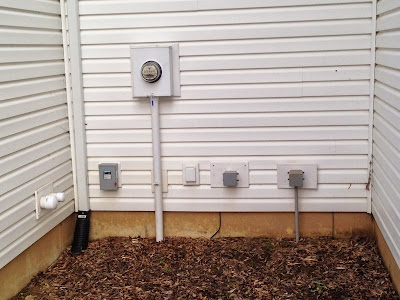 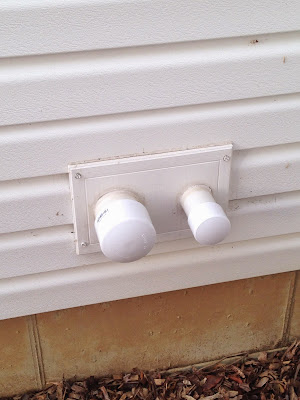 So, he took the motor apart on the furnace, and it wasn't a dropped nut or bolt, but mouse skulls bouncing around in the motor!  Not one, but three!  Not only that, but the mice chewed some of the fan blades in the furnace motor, which made it off balance, loud, and not able to vent properly.  So, we tried to order a new fan.  No Can Do.  We had to order an entire new motor which cost over $200.00.  This is for a furnace that has NEVER been used! 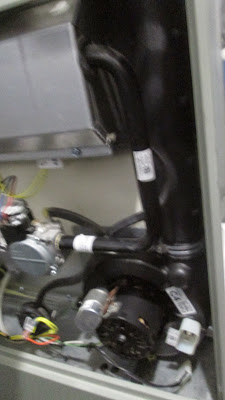 He decided to inspect the heater some more, and found six more dead mice in the secondary heat exchanger!  Apparently, they got into the furnace and couldn't get back out!
And the thing is, he put screen in the pipe leading outside that goes into the water heater, 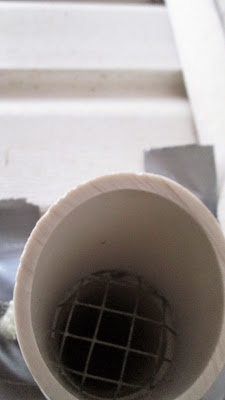 but has no idea why he didn't put it in the pipe for the furnace.  Probably got interrupted.
We were trying to figure out how mice could jump two feet high and get into the pipe anyway!
Someone Dave works with said they probably walked on the snow and got in there!  Whodathunkit?

After much deliberation, he decided to play it safe and re-run the PVC pipe from the water heater so that it would have less "points" in it.
So he took out the old, which is why it's capped off in the photo above,

and re-routed it straight through the maintenance wall, 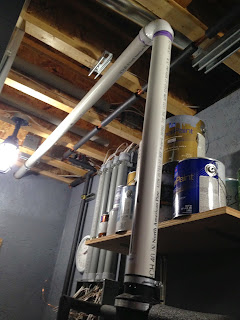 into and through the pantry, 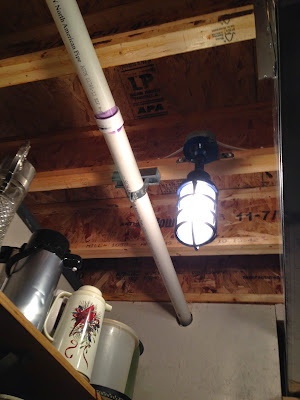 and outside the house 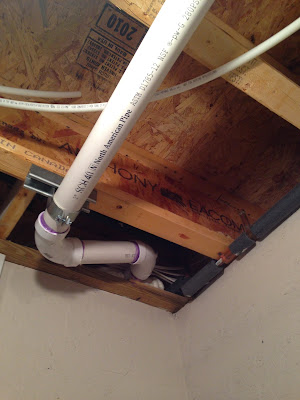 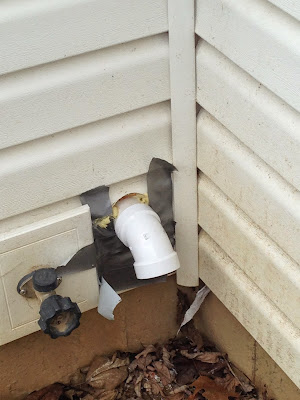 And after thinking some more, he re-routed the furnace as well.
(and people wonder what is taking us so long!)
Building a house requires A LOT of thinking! 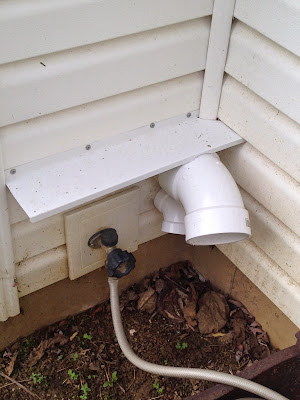 And both pipes have screen in them. 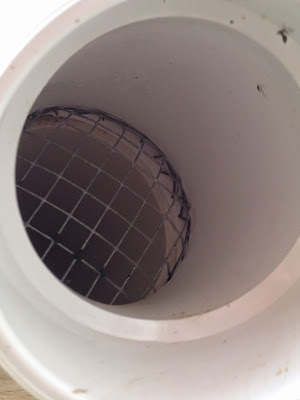 They now come out of the back of the house on the right side of the porch.  This porch has been a huge pain through this whole process. It's not big enough to use for anything, and it blocks any of the venting that could have been brought out of the house. 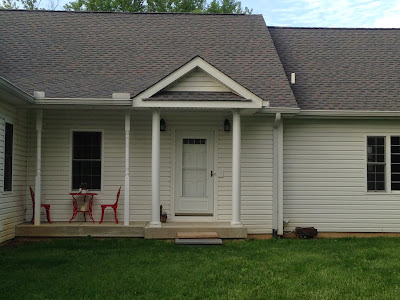 Hence, drier vents on the porch.  Oh well, I doubt we sit back here much. 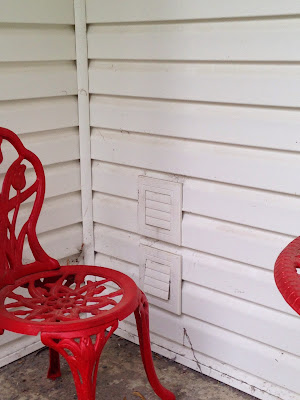 So anyway, that's the mouse story....we did get the gas turned on....and we did have Easter at our house! However, there is still something wrong with the darn furnace!  AUGH!